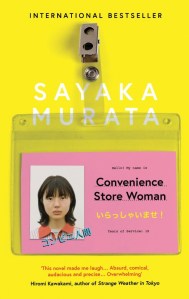 Convenience Store Woman has been a bestseller in Japan since 2016, and was released in English last year as a translation by Ginny Tapley Takemori. So, because this is a blog for book nerds (among other types), we’re going to review both the story and the translation.

The story goes like this: Keiko is a woman who doesn’t understand the rules. Nobody seems to like the way she is, so she watches other people to see how they behave, and then copies them. She finds work in a chain convenience store because they have an employee manual that tells her exactly what to do. How to stand, how to say hello, how to move.

But it’s still not enough; she still doesn’t fit in. Everyone wants her to get a career, a husband and a baby. And when she meets a man who is desperate for a girlfriend and a place to stay, she thinks she has found the solution.

I loved the setting of this story. Murata takes the time to describe every well-polished detail of the convenience store, and every trick of speech which Keiko learns by heart. If you’re the kind of person who likes making bullet journals or to-do lists, you will find these passages soothing. And they certainly fit in with the popular Western image of Japan: a place of bright colors, KonMari-style neatness and immaculate customer service. (Even the cover of the book itself is Millennial pink and primrose yellow.)

But we learn to be uncomfortable in the convenience store. It’s just a bit too… convenient. As the years pass and the store’s neat display of rice balls, chicken skewers and cigarettes remains the same, it begins to feel uncanny. Even the characters in the story feel ill at ease, like the woman who visits every day, grumbling that nothing ever changes.

Keiko’s ersatz boyfriend, Shiraha, stumbles in as a horrifying contrast. He dresses badly, and his teeth are foul. He doesn’t care about facing the store shelves neatly. He slowly takes over Keiko’s apartment, spreading from to room like black mould until she has to sleep in the bathtub. He is simultaneously needy and cruel, spewing speeches about Keiko’s mental and sexual inferiority – as if the man in Cat Person had started reading Men’s Rights forums.

I suspect that some readers will view Keiko, or Shiraha, or both, as autistic characters. But I don’t think that’s what Murata is trying to represent. Instead, she is making us confront our own discomfort with anyone who doesn’t have the same goals as us.

Rejecting marriage or a career are still seen as bold moves – even though marriage is a choice (at least in Japan and the West), and many people will spend their lives working in service jobs. Eagle-eyed readers will note that Murata herself works part-time in a convenience store. Now, I don’t know if that’s due to preference or finances; but there is certainly nothing unusual about running multiple hustles in 2019.

Far from being a robotic, symbolic character, Keiko also lives out real insecurities and weaknesses. The scene where she lies about her relationship status – saying that her new boyfriend is lovely, just too busy to come this time, you’ll meet him another day maybe – is pathetic, but familiar. Anyone who has been reluctantly single will recognize the horrible, guilt-soaked temptation to pretend. Anything to make people stop asking.

As you might have guessed, the pseudo-relationship doesn’t turn out well. And this is another way that Keiko is typical: she totally fails to recognize that her situation has become abusive. Millions of people experience domestic abuse – and struggle to see it. That’s why there are guides and questionnaires to help people realize that they are being abused.

So in fact, Keiko is a lot more normal than she thinks.

The prose is beautifully translated. Keiko has a very distinctive voice, and despite her rather mundane existence, a rich and varied vocabulary. I especially liked the fact that, although the writing flows, Takemori has not given Keiko an “English” voice. Despite being translated, she remains inimitably herself.

That is the victory in this story. Keiko comes through change, challenges, and the unwelcome opinions of others – and ends up doing what makes her happy. May we all be so lucky in finding our purpose.

We talked about domestic abuse in this review. If you or anyone you know needs help, you can find resources for every country and language here.