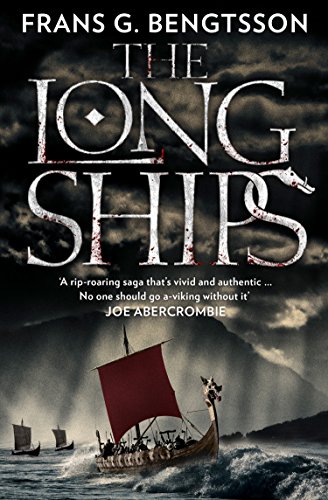 This is the tale of Orm Tostesson, later known as Red Orm, and his travels about the world. As a slave, a warrior, and eventually a chieftain, Orm journeys all across Europe, seeking fame, fortune, and wealth.

This is a saga, with a saga’s length and disregard for modern ideas of plotting. Orm’s life is told from its start to its near-enough end, and while it falls into several sections, there’s no standard plot arc. It’s a full life, well-lived, with occasional digressions when another viking tells their story.

The language of The Long Ships is simple. It reads like an old children’s story – simple sentences but with an expectation that you have a wide knowledge base and decent vocabulary. It’s partly because of its age – it is an old children’s story (first published in 1941) – and partly because it’s translated from the original Swedish, and has the careful quality you would associate with that.

The simple language though, applies to sentence structure and not to content – the simplicity masks a lot of complexity. You are lulled into a sense of false security by the tone, so that moments of intense violence and unexpectedly filthy jokes hit hard. Characters are layered and nuanced, with even the most overtly heroic revealing softer sides and minor characters still showing distinct personalities.

One of my favourite things in historical fiction is when the story touches the edges of history – when characters and places I already know about suddenly appear in a new context. It pins the story to the real world. This happens a lot in The Long Ships, but there are a lot of things I could tell were significant, but that I wasn’t familiar with. I need to read more about Norse history.

Viking morality is not modern morality, and the book makes no attempt to soften it. Terrible things happen to people who shrug them off, and minor things happen that are avenged as deadly insults. Half the time, if characters in modern novels did the things that the heroes in The Long Ships do, they’d end up as the villains. I found the moral system something of an adjustment – sometimes I ended up sad or content when I wasn’t supposed to be, but it’s rare to come across a book that presents another culture without excuses or attempts to make it more palatable.

By turns, The Long Ships is exciting, affecting, and darkly funny.It reads like Beowulf, or the old legends of Norse gods and mighty heroes, which makes sense because it is a story of mighty heroes. It’s very different to the norm, but it’s absolutely worth reading.