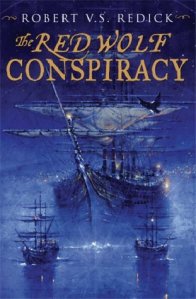 On the face of it, The Red Wolf Conspiracy is something that I should love – it’s fantasy with complex political themes that takes place on a ship in a somewhat Napoleonic era. Everything about that is something I’m interested in, so when I friend offered to lend the book to me, I jumped at the chance.

However, I’ve spent the past month being extremely busy, so much so that I’ve barely managed to read anything. What little I have read has been from this book, but it’s a big book  (nearly five hundred pages, quite small print), and so it is only today that I’ve finally managed to sit down and finish it.

The Red Wolf Conspiracy is primarily set on the Chathrand, a vast ship with a dark history. Pazel Pathkendle, a young tarboy with a different but related dark history, sets sail on the Chathrand and slowly uncovers vast and complex machinations on the high seas.

It’s a book with lots going on – lots of characters and locations, lots of different motivations, all focusing on this one ancient ship. Everyone’s past is relevant, every character has secrets. There are talking rats, warlike borrowers, and ancient sorcerors. At first, it seems a little overwhelming, with all these different concepts and details crowding around, but slowly the elements start to pull together until you are focused on one or two characters and the plotlines start to converge and link together.

That initial hubbub is a big part of why it took me so long to finish the book – I struggled to be engaged through the dense and confusing beginning, and so the book didn’t hook me fast enough to make me find the time to read it. With a book I’m hooked on, I’ll happily forego sleep, but The Red Wolf Conspiracy only picks up about a third of the way in.

The setting is the strength here – there are lots of aspects that I find interesting. The “crawlies” – tiny humans who live unseen on the human ships – are a fascinating idea, as is the concept of “awoken” animals; in the world of The Red Wolf Conspiracy, sometimes animals just start talking, sprung to sentience by a formative event. The story only introduces a few of them, but the passing mentions of their stories and fates caught my attention.

I like detailed, complex worlds in fantasy, and this book provides that. It isn’t just a colour-swapped medieval country, it isn’t just a standard fantasy setting, orcs and all. Redick has clearly put a lot of effort and thought into pulling all of the details together, creating a world that has a lot of interesting and original elements. I like that – I like being able to believe that it is a world, not just a setting ,and I like knowing that there is a much wider culture and history than the moment that we are presented with.

However, the detail is also the book’s downfall: there’s too much of it. The story begins in media res, and it takes hundreds of pages to work out exactly what is going on, or how it all fits together. Entire civilizations are introduced and then not seen or heard of again until the end. Sections of history that may eventually be relevant are flung in, but the reader has no idea why, and some points are clearly intended to be resolved in the sequels.

The captain of the ship, Nilus Rose, is introduced as an almost demonic figure, hated and feared by almost everyone, but the reader never really gets to actually see that, or even be told why – frankly, Rose is mostly a very pleasant and reasonable character, who doesn’t do anything to deserve his fearsome reputation.

The Red Wolf Conspiracy is clearly written as part of a series, and there are several sequels currently available. However, that has meant that the book doesn’t really stand on its own: it is not a focused narrative. Elements appear that shouldn’t, and it muddles the pace and flow of the narrative. I’m all for foreshadowing, but there is a limit.  If a detail, character, or culture pulls the focus of the book for any significant amount of time, there has to be a payoff: that information has to be relevant at some point, in some way, in that book. You can’t fire Chekov’s gun in a different play.

Any one of those would be awesome, and each one of those gets a couple of short chapters. Redick should have focused on one of those, but instead what we get is a confused mess of almosts, linked together with an overly complicated overarching plot. And it isn’t a great plot (generic save-the world), made worse by the obvious potential on display.

The overall plot isn’t even there half the time – it is introduced a short way into the book, and then is mostly ignored until the very end. During that time, characters do various things, often interesting ones, but there isn’t a sense of progress overall, or any feeling that the narrative is moving towards its conclusion. The final confrontation appears tacked on – I found that I cared far more for specific characters’ problems than for the titanic combat that was suddenly going on.

Reading back over this review, it sounds very negative. I can’t really recommend the book for its structure, or its pacing, or its focus: it tries to do too much in too long a time. However, the ideas are good: I love the concepts of the setting, I love the various details that Redick gives about a well-fleshed out and original world.

Certain chapters are coherent and exciting – I’m particularly, as is probably clear by now, fond of the sections with the awoken rat and the crawlies. The descriptions of living in close proximity to giants who will kill you and all your people on sight are tense and engrossing. More of those would be very welcome.

Redick is a good writer, but one who needs a much more active editor, and a much more clear sense of structure. A few changes to the overall narrative and flow would dramatically improve the book.

As it is, the book is great in some ways, and less so in others. Characterization, setting, and often the pose are all clear strengths. Pacing, structure, and overall coherence of narrative are clear weaknesses. Those are problems that might get fixed in the sequels, which I’m unsure about; I don’t know whether they’ll be worth struggling through in case they end up more controlled.

In the end, I am totally undecided on The Red Wolf Conspiracy. I don’t know whether I like it or not. It has some great elements, and a some glaring flaws. I can’t make up my mind. Read it if you want, but you will need a lot of patience to get to the good bits.