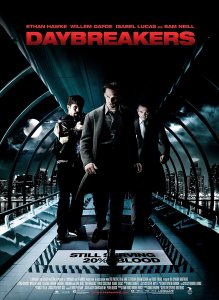 I didn’t intend to watch Daybreakers. I was looking for a slasher film I hadn’t seen before, and found this film instead. It looked like a schlocky vampire film, and I thought that would scratch the same itch.

That’s not what Daybreakers is. Rather than being a fun, campy b-movie in the vein of Van Helsing or Underworld, Daybreakers is a surprisingly complex and polished film.

The film takes place in a world run by and for vampires. All houses and cars are fitted with shutters against the sunlight; walkways and tunnels connect all the buildings. Unturned humans are an increasingly small, hunted minority. When they are caught, they are farmed for their blood. END_OF_DOCUMENT_TOKEN_TO_BE_REPLACED