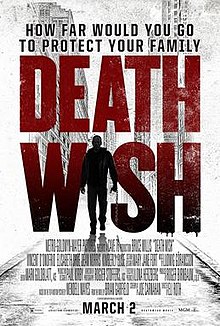 When the police can’t protect a surgeon’s family, he takes the law into his own hands; with his wife dead and his daughter paralysed, Paul Kersey (Bruce Willis) becomes the “Grim Reaper”, a hooded (technically hoodied) vigilante.

Anyone who has ever seen any other vigilante film will be able to tell you the plot without having seen Death Wish itself.At first he’s a loving family man, then crimes happen, so he starts killing people, slowly working his way up to the bad guys we saw in the original crime. There’s a worry that he’s lost his humanity, the over-worked cops are tasked with catching him but don’t really want to, et cetera. Everything is as you expect.

Where Death Wish stands out is the level of polish. I’d like to emphasise again that there is absolutely nothing new here in plot or characters, but it’s very slickly put together. There’s a cast of well-directed and talented actors, the cinematography is of a consistently high-standard, and the plot hits every necessary element. The script is the weakest part, but only because it is so very vigilante-by-numbers that the little symbolic elements are hammered in so no one can possibly miss them.

This is a formulaic film, but one made by people who followed the formula exactly and had a lot of pride in their work regardless of its complete lack of originality. It’s based on not just all vigilante stories ever, but is also a remake of 1974’s Death Wish. That rich tradition has reached its pinnacle here. Regrettably, it turns out that the pinnacle of vigilante films is both bland and forgettable; it’s polished and does nothing it shouldn’t, but there’s no real draw here. I doubt I will remember it for long.

It’s also extremely right wing – almost to the point of satire. Vigilante stories are – perhaps unavoidably – always quite crypto-fascist, but this one takes that to another level. It does approve of guns and distrust minorities, but Death Wish would also like you to know that health bars are nasty & and only eaten by ineffectual, over-weight cops. Death Wish also suggests that criminals don’t deserve medical care and would like you to see how big its muscles are.

Death Wish does not do tact, at least in its themes. Characters explicitly and repeatedly state the messages of the film, regardless of what else is going on at the time. After his daughter’s funeral, Kersey’s father in law stops to shoot at poachers and lecture us all about how the cops won’t ever get there in time. Death Wish wants everyone to buy at least two guns and then point them at the nearest person with tattoos.

It’s strange to see a film with this much technical polish be as clumsy in its themes and messages – it’s like putting make-up on a mole rat. People capable of making a film that hits all the right plot notes should notice when they are leaning on a metaphorical air horn.

Race is very deliberately managed throughout. Positively-presented black characters are seeded throughout the film to highlight that the film isn’t racist, but it’s so deliberately done that it achieves the opposite effect; those characters are there as bit parts to point to in case anyone criticises a film about a middle-aged white man shooting minorities. No similar care is taken for Hispanic characters – they’re pretty much all shown to be evil. In fairness to Death Wish, some white characters are killed, but a lot more work goes into establishing them as evil, and they’re all shown as lower class anyway.

Vigilante films are a guilty pleasure of mine – they’ve got satisfyingly simple moral landscapes and sometimes I want that. Death Wish doesn’t work for me though – it’s based in that peculiarly American gun-owning mindset which is filled with fear of the outside world; people who don’t like you are coming to get you and your blonde family, all the time, from every direction, and the only things that will save them are being prepared for everything and shocking violence. There’s a torture scene in this film, because of course there is, and you’re meant to see it as a rational and understandable thing, rather than deeply messed up.

I’m scared of most things, but I don’t have an unshakeable belief that people with unfamiliar accents all want to kill me and that modern society is too soft to be safe. I sound like I’m caricaturing here, but Death Wish is a film made by and for people who live that caricature. I like stories about people taking justice into their own hands, but I like them as stories, not my day-to-day paradigm. Death Wish is the vigilante-film equivalent of those people who seem just a bit too eager for the nuclear apocalypse and have already made their raider flags.

Buy it here, or watch it on Netflix.