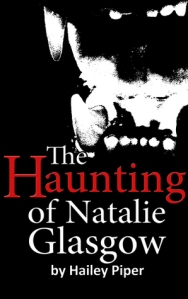 There’s something inside Natalie. Something hungry and fierce and far more dangerous than the eleven-year-old girl it’s living inside. By day, an exhausted Natalie sleeps; by night, the thing inside her prowls the house while her mother cowers upstairs.

When doctors are unable to do anything, Natalie’s mother turns to more exotic solutions. The thing grows stronger as Natalie wastes away; there is not much time to find some kind of cure.

This very short; the author calls it a novella, but I think it’s more accurate to call it a short story. With that said, it is a complete narrative, and it’s hard to see where it could be fleshed out in a way that wouldn’t take away from the impact. Everything the story needs is here, in a compact package; we get enough detail to flesh out the world but not to overload it.

The prose is sparse and effective. Descriptions are as long as they need to be and no more. Hailey Piper is good at writing tension – there’s a section of the story on a staircase which I found particularly effective, though some of that might be to do with the fact that I read it almost immediately after walking up a staircase in the dark – a staircase that has terrified me since early childhood. Throughout, there’s a sense of menace and danger, which is a hard thing to maintain, and the author handles it very well.

The title suggest one of those dissatisfying modern horror films, with jump scares and minimal plot, but that’s not accurate – it’s more fresh and more well thought-out than that. Both plot and characters defy convention and are used well. The twist is signposted but not too obvious – you work out it before the characters do, but not so far forward that they seem slow. I found this terrifying in places and engaging in others – it’s most effective at the start but the ending wraps up rather than fizzles out, which is the danger point for horror.

Overall, I liked this. Short but satisfying, and with a strong atmosphere. I will look out with interest for more of the author’s work.

I received a copy of this book from the author; I don’t think that has affected the impartiality of my review. Two interesting things though – it’s her first published work, and it was released today. That’s exciting.