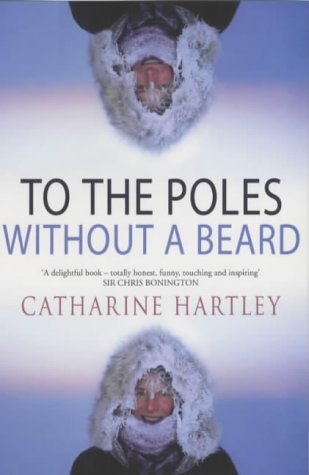 The story of an ordinary thirty-something city girl who became the first British woman to walk to the South Pole. ‘We called ourselves Plebs to the Pole. It was the first time travellers with no previous polar experience had the chance to attempt such a journey. Before our expedition, Antarctica had been sacred territory – the preserve of scientists and real explorers. No one had any idea how amateurs would perform in such extreme conditions.’

In January 2000 Catharine Hartley, a thirty-four-year-old Londoner with no previous polar experience, walked into the record books by becoming the first British woman to reach the South Pole on foot.

Just over a year later, she topped her achievement by manhauling her sled to the much more physically challenging North Pole. To The Poles Without A Beard is a wonderfully humorous tale which differs considerably from the usual (male) polar account, as Catharine is no polar-bear eating, athletic toughie who exalts in as much physical discomfort and misery as possible, but an ordinary, Chardonnay-loving girl from London who decides with remarkable willpower to achieve the impossible. Catharine’s story is an inspiration to all those who have ever wanted to make their dreams a reality.

I was given this to read after finishing Farthest North by Fridtjof Nansen, as a contrast. And it is definitely a contrast! Nansen’s book is very factual, being a diary account of his attempt to reach the North Pole. I thoroughly recommend it, with a slight warning that it is meaty and takes a while to read, but this review is not about “Farthest North” so I will now concentrate better.

“To the Poles (Without a Beard)” is a description of the two trips Hartley took, within two years, to both poles. With one other woman, who was joint first, she reached the south pole and the north pole on foot.

The achievement is seriously impressive, and her descriptions are in some ways much more in depth than those of Farthest North, as she lists the number of layers and types of clothing needed to survive in extreme cold conditions, whereas Nansen (and other explorers like him) were much more dismissive – he frequently says things like ‘ it was a balmy -45 C today so we were comfortable in our reindeer skin sleeping bag’ which tells you a lot about his hardiness but not a lot about how the rest of us would survive. (In case you can’t tell, that was not a direct quote).

Hartley also explains the way food is rationed and chosen, how the walks were divided and how the walkers were supported, so that if you do ever want to go on a similar expedition, this book would be a good start for ideas on how to organise it. It’s a quick read, gossipy and colloquial, and exciting mainly because it makes it seem like really anyone, even you the reader, could also walk to the Poles one day.

My main issue with this book, however, is that Hartley is really, really, really annoying. She is insecure, immature and self-centered. She leaves everything to the last minute (including such vital things as buying gloves), she causes all sorts of difficulties for her team mates (nearly not being allowed into Canada on their trip to the North Pole, which would have scuppered their chances as the season where it’s safe to travel is so short, because she deliberately got paralytically drunk on the aeroplane), and if it were not for the incredible patience of her team mates, she would not have made either trip.

Please note, I think that anyone doing this kind of journey would need support, both journeys are over difficult terrain, lengthy, and in extreme conditions. Hartley needs an awful lot more than that level of support, and there were times when I was genuinely ashamed of her. Her team mates (particularly the couple who went with her on both expeditions) are inspirational – they walked to the North Pole, they walked to the South Pole, they dealt with illness, injury, and Hartley. But if someone this unsuited to a heroic enterprise can manage not one but two, maybe she is also inspirational? I can’t decide.

In summary, it was great to read the story of a modern ‘explorer’ managing to walk to both Poles, and to read something that made me feel anyone including me might do it one day too. However, if you’re not one to suffer fools, maybe read Nansen instead.

View all posts by inwheenzible

My Tweets
Join 342 other subscribers
Follow Inconsistent Pacing on WordPress.com