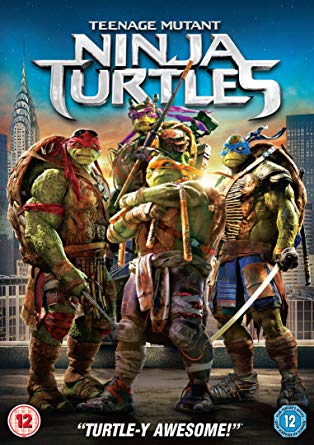 New York is in danger from gun-wielding ninja gangs, robot samurai, and corrupt scientists. The citizens have only one hope, and no one knows about them.

April O’Neil, a reporter who is more intrepid than her job allows, discovers hints of the existence of a secret vigilante force: a group of ninjas who are also giant talking turtles.
Teenage Mutant Ninja Turtles (hereafter abbreviated to TMNT, because it takes ages to type) is a film driven by nostalgia that seems determined to do as little as possible to gratify that nostalgia. Everything that you would expect from the concept – the villains, the quips, the origin story – has been changed for seemingly little reason. In this, Splinter was never human, and never knew Shredder. Shredder is an overly-complicated metal suit, with none of the quiet menace of the beloved children’s cartoon. Bebop and Rocksteady don’t exist.

It’s change for the sake of change, and it weakens the film. That’s partly because anyone watching familiar with the earlier versions is going to lose immersion every time they notice a change, and partly because those changes are rarely positive ones. All the catchphrases and characters are there, but that’s about as far as it goes – it’s a shallow veneer, not built on any solid foundation. The result is a film that is mostly not based on the Teenage Mutant Ninja Turtles, which then has a layer of simple references pasted over the top to make it seem more faithful.

April O’Neil (Megan Fox) is definitely the main character, rather than the turtles. I can see why that choice was made – it’s easier to get empathy for a human than a hideous CGI abomination – but she’s also a less interesting character, and not a titular one. A greater focus on the turtles might have made for a more fast-paced and exciting film.

TMNT is a film that doesn’t know whether it wants to be a comedy or an action film. It doesn’t manage to blend the two parts very well, and so ends up lurching from one genre to another, moments of violence interspersed with light-hearted quips and jokes that rarely land.

The film has a lot of decent actors in, working hard, but it’s ultimately let down by a poor script and an over-reliance on standard action film tropes. You can see the formula and call the twists, with big set-pieces taking the place of dramatic tension. Instead of a light-hearted remake of a beloved series, it’s a forgettable film that doesn’t really have any impact.