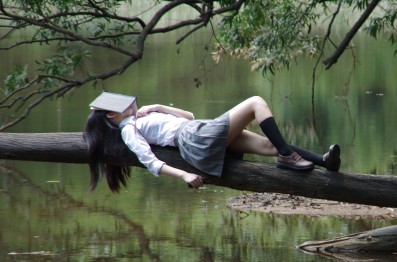 I used to struggle with guilt about books and television I didn’t like. Once I had made it past the first chapter, or past the first three episodes, I would feel like I really had to continue. I made THREE attempts to finish JRR Tolkien’s Lord of the Rings trilogy, and was defeated each time by the endless descriptions of military movements. Pace Alan Bennett, it was as if a hand had come out from the page, and beaten me into a coma.

Friends, readers, fellow subscribers, break free from your chains! Stop drearily attempting to finish that show you hate just because George-from-work keeps talking about it. Today, I plan to share a few of the things I have unapologetically stopped watching. No guilt. No shame. No wasted time. Lots of spoilers in here, though.

1. Why are Americans so weird about blood: The 100

Look, I knew what I was getting into when I started. The 100 is terrible. No one disputes this. The acting is hilariously wooden, the script creaks like a five-masted galleon under sail, and it contains yet another thinly disguised Vampires Versus Werewolves love triangle.

But I was enjoying it nonetheless, right up until the second episode of Season 2. It turns out that the smooth-cheeked hipster weirdos who have been hiding out in an old nuclear shelter are draining the innocent forest people’s blood to heal their own injuries. Now you can call me a wuss, but people repeatedly cutting themselves and each other, in close-up, is not something I choose to watch.

I still have so many questions, though. There’s a lot of class and race undertones in The 100. There is an awful lot of science fiction coming out of the US, in general, which hinges on social inequality and Weird Medical Shenanigans. I have developed some elaborate theories about how this is a product of North American anxieties about racial hierarchies and blood purity. However, I had more fun sketching out an imaginary article for Anthropology Today than actually watching the episode. It was time to move on.

2. Where is the R: Game of Thrones

This is a double confession: I didn’t finish either the books or the series. (Nor has George RR Martin, HEYOOO.) However, my quibbles with each format are distinct.

I read the first book, one very long summer, when I didn’t have much else on. It was pretty exciting. Lots of bashing people with swords and muttering dark prophecies, which I like. What I couldn’t get past was the exhausting detail. I wish more fantasy authors would read the Princess Bride, where William Goldman very sensibly explains that he has edited out the banquet menus and weapons inventories because honestly who cares. A Song of Ice and Fire could have been a slim 300-page read and millions of trees would have been saved.

I made it much further with the TV show: all the way to the third season, although I had been watching with growing unease. What finally put me off was the storyline of Craster’s Keep. A brave band of Northern fighters finds an outpost where a group of women are enslaved, raped, and forcibly separated from their children. They do nothing. A few episodes later, they come back and kill the evil perpetrator. Then they enslave the women left behind, rape them, and forcibly separate them from their children.

3. I could be hanging out with my friends: Orange is the New Black

I was so excited to watch this show! There was a lot of hype. It fills a gap in a genre that is otherwise well-represented on screen. Audiences and writers love prisons, because drama and tension come built into the set; but in previous prison dramas, women were nowhere to be seen.

The main character, Piper Chapman, is a whiny pain in the neck. It’s kind of her schtick. You have to accept it as a necessary part of the storyline, and anyway, all the other characters are so terrific that you can ignore her. However, we are several seasons in, and nothing has changed.

Piper is still the star, against all odds and the increasingly desperate pleas of viewers. The writers are doing their damnedest to make prison, by definition static, into a dynamic stage: there’s new management! The prisoners escape! Now they’re in a different prison!

It’s all in vain. The characters themselves are in stasis. One day, I was half-watching, listening to someone telling someone else why she was giving her psychotic no-hope girlfriend another chance. The script sounded oddly familiar. Of course: you can eavesdrop on conversations like this in any bar.

I realized I could go and hang out with my friends, where I would hear exactly the same conversation but from people I actually liked. I logged out of Netflix and went outside.

4. I am so tired of sad white men: Flaked

I’ll level with you. I actually think Flaked is really good. Unfortunately, I started watching it after I had already seen Love and Californication and Mad Men and Arrested Development and Bloodline and House and, and, and. I am so tired of sad white men who drink too much and make grandiose speeches.

I am not diminishing the struggles of Will Arnett’s character. Flaked is touching, well-written, and he acts beautifully. But this is a story we have heard before. Again and again. It crowds out space for any other narrative. We already know what a sad white man looks like, because they are playing on every channel.

This is a bit of a blurry category, to be fair. Lovesick is about sad white men, but I will always adore it for its originality. Unusually, the characters actually grow, change, and argue with each other productively. Girls and Master of None are not about white men, but they are about wimpy navel-gazers: this means I gave them one season of my time, and then stopped.

Mercifully, nobody has made this into an interminable twenty-four-episode series with an unjustifiable second season. Yet. However, the book bears mentioning here because Ulysses is an example of deceptively bad writing.

But it’s a classic!, I hear you cry. I studied it at school! Everyone down at Flat White Moustache says it’s their favourite book!¹

Stop it. Stop pretending. Everybody hates Ulysses. It’s completely unreadable. James Joyce has been wandering around the literary sphere like a naked emperor since 1922, and it’s time for him to put on the underpants of honest criticism.

I am not, please note, encouraging you to be lazy; but good quality content should be gripping. It shouldn’t feel like hard work. When you refuse to waste time on shows you don’t like, you free up a lot of time and mental space for the good stuff. And if you don’t know where to find the good stuff, try reading the Inconsistent Pacing reviews for some ideas.

¹Flat White Moustache is my fantasy coffee shop. They have exposed brick walls, a Bean of the Week, and of course, a book club which I never attend.

One thought on “An Incomplete List of Unfinished Series”