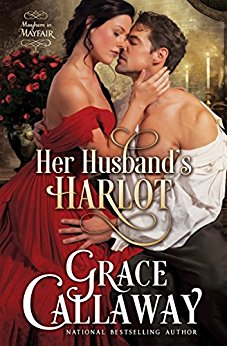 Distraught over her husband’s coldness, Lady Helena disguises herself as a much less reputable woman and follows her husband to a brothel. This precipitate action sets in motion a string of events involving passion, trauma, and just so much subterfuge.

As the title suggests, this book is extremely racy, occasionally dancing over the line between romance and erotica. I keep meaning at some point to construct a grand scale for these sorts of things, because you can definitely measure and categorise it, but in the absence of that, it’s a touch beyond Fifty Shades of Grey and miles past Pride and Prejudice.

Interestingly though, whilst the book is quite explicit, there are large sections where it isn’t at all. This is not one of those books where the plot is just thin connective tissue for the sex scenes, although you could absolutely be forgiven for assuming that. Instead, the plot is a massive and complex thing with layers and double-crosses and subplots. At times, the plot comes so much to the fore that the romance just disappears and the main characters barely interact with each other, they are so busy dealing with smugglers and blackmailers and wan acquaintances.

That is a little confusing, as a reader. The book opens by plunging directly into torridness (torridity?), and then sidesteps from there to the slums and the particulars of merchant trading. I don’t imagine many readers pick up a book with the word “harlot” in the title are looking for gritty crimes set in London’s underbelly, and it is something that takes some readjustment, setting your expectations to a new level. As a side-effect  of this, the middle sections of the book run slowly, as all the different moving pieces shuffle into place.

The book is unexpectedly well-written, and clearly a lot of research has gone into all sorts of different aspects of Regency society. The author has made some bold choices with accents, which I both deplore (because it veers into Mummerset at points) and applaud, because character development through accents is an ambitious play. The somewhat experimental prose is somewhat let down by the more graphic scenes, as some of the vocabulary is necessarily less consistent with the popular idea of the Regency.

I always approve of books that try and confound expectations and do something unexpected. Her Husband’s Harlot does that – it is more everything than the title and cover would suggest. If you want explicit sex in mannered society and crime-ridden slums interwoven with your romance, then this is the book for you.