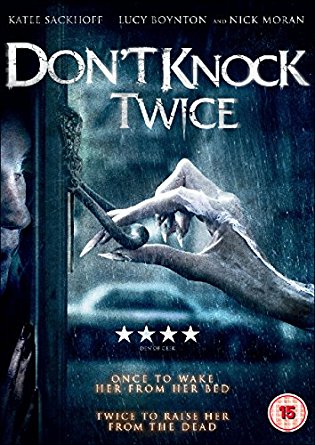 You know that house, the one at the end of the street? The one with the overgrown garden or the broken windows or the gate that creaks open when you walk past? The one kids tell stories about and dare each other to approach? That’s the one in Don’t Knock Twice.

Long ago – though still within recent living memory – a witch died in there. Or maybe she wasn’t a witch. Anyway, when you knock on the door twice, she comes and kills you. Everyone knows this, and a bunch of them knock on the door anyway.

The knocking thing is actually just the setup – most of the film deals with a mother trying to save her estranged daughter from the monster, which has taken a break from its normal smash-and-grab to play a more subtle and slow-paced game.

The monster is one of the modern sort – an ancient demon that has an uncanny knack for dramatic timing and a full understanding of how to use modern technology. I guess it has to be that way – monsters that can’t adapt to the ubiquity of phones and other modern conveniences probably struggle to feed. It’s hard to isolate a constantly-connected victim without playing the social media game.

This is a film that tries very hard to be sophisticated. There are attempts to criticise the genre, overturn viewer expectations. I’m all for horror films doing that, but for it to work, the rest of the film has to hold up very well.

This film does not hold up that well. It has some good ideas – there’s a functional subplot, and a moral dimension that is sadly lacking in a lot of horror films. Ideally, victims should sort of deserve their fates, but nearly avoid them; that’s what makes horror engaging rather than just gratuitous. Don’t Knock Twice does more with misdirection and morality than a lot of similar films, and that’s a definite positive.

Don’t Knock Twice is full of little moments that almost lead to something better, but there are too many diffuse ideas, and most of them are call backs to other, more well-known films. One idea that gets a bit developed before the film becomes distracted is the whole “what if the monster is really motherhood” thing that The Babadook was praised for. All the way along, there are attempts at depth and theme, but the strings are both too short and too obvious for it to work.

In all, this is a generic horror film that wants to be better, and there is a sort of tragic nobility to that. However, the film is inconsistent and forgettable, never quite living up to its promises.