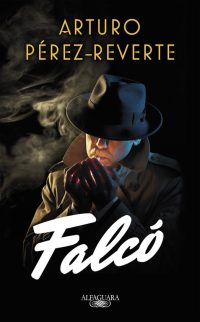 A good-looking gent in a soft hat leans back in his seat as the train puffs down the track to Barcelona. When the engine pauses in Narbonne, he stubs out his cigarette and walks quickly out on to the platform. Minutes later, a beautiful woman will be found dead.

Yes, we are in the chain-smoking, gun-toting, heart-breaking 1930s. The clouds are gathering over northern Europe, but in Spain, the storm has already broken. The eponymous hero of Arturo Pérez-Reverte’s thriller, the mysterious Falcó, is making the best of the situation by offering his sinister talents to Franco’s secret service.

Pérez-Reverte has a long list of bestselling thrillers to his name, most of them set in colourful historical periods. I read Falcó in Spanish, and I recommend either reading the original or looking out for the inevitable English translation. The descriptions are thick with the scent of cigarette smoke, perfume and cordite; the plot takes dizzying twists and turns. The author has an unfortunate tendency to describe women as landscapes, but we all have flaws. Perhaps Falcó has just spent too much time staring moodily out of train windows.

One of the most fascinating things about this story – and I’m not sure it’s intentional – is how Pérez-Reverte tries to hedge his bets. Falcó is not really a fascist; he’s just in it for the money. He has earnest little chats with his boss about how terrible the war is, while smoking cigars at headquarters. He will disobey orders for the love of a good woman, but he’ll be back at his desk on Monday morning.

Perhaps this is a literary allegory for Spain’s schizophrenic history, but I think there is a more mundane explanation: Pérez-Reverte is used to being a bestseller, and he doesn’t want to take sides. In Spain the past, just like James Bond, never really dies.

It’s a period of history which is unlikely to be familiar to Anglophone readers. If you’re looking for a handy guide to the main timeline, you won’t find it here; Pérez-Reverte does an excellent job of conveying the mind-numbing confusion and frustration of war. However, what you will find between the dark covers of Falcó is a classic thriller, set in a lost world which has been recreated with minute and unerring accuracy.