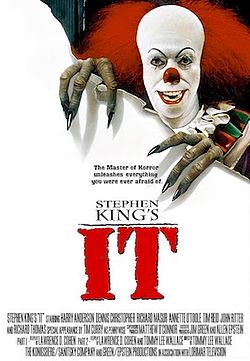 I think most people are probably familiar with the basic idea of It, in the same way that everyone understands generally how Freddy Krueger or Jason Voorhees operates. Essentially, the town of Derry is home to a fear-eating monster that often disguises itself as a clown.

The story is split over two time periods – one in which a group of outcast children are hunted by the monster, and one years later in which the outcast children, now adults, return to Derry to deal with the monster again. As you might imagine, it’s quite a long book.

The 1990 miniseries was an attempt to take the massive and complex story of It and distill it down to a three-hour running time. It was reasonably successful.

The major strengths of the novel were the terror it engendered and the portrayal of 1950s childhood. That second element is the greatest strength of the miniseries. It convincingly creates the childrens’ world and perspectives – a few well-chosen scenes establish the rules they play by, the pressures they are under, and their underlying characters. As a writer, King is gifted at bringing Americana to life; It does as well.

However, the horror inter-woven amongst the childhood experiences is not as strong. It’s all a bit obvious, less fear-made-flesh and more clown with big teeth. General special effects – big glowing lights – substitute for subtler ones, and at times it feels more like a portal fantasy than a horror film.

Tim Curry makes a very memorable Pennywise, but he’s definitely playing a clown who happens to be evil, rather than a monster pretending to be a clown. That might sound like a pointless distinction, but it does affect the menace of the whole thing; you find yourself laughing with Pennywise, rather than shrinking from him in horror. At its best, the horror is implied rather than direct, a voice or a signal, not the full clown.

It has an unsatisfying ending, devolving to rubber monsters and scenes that look like they belong in Labyrinth, rather than the creeping horror that you want from the story. That is, again, another similarity with the book – both end weakly, moving away from the core concept into metaphysics and confusion.

As a horror film, It is unsatisfying. As the film version of a novel, it’s quite close. It was always going to be a hard book to adapt, but the miniseries manages to capture not just the high-points and the overall ideas of the novel, but also, and rather less positively, the weaker notes as well. I enjoyed the series, I thought it was very well made, but it wasn’t as polished or as creepy as I wanted it to be.

My Tweets
Join 341 other followers
Follow Inconsistent Pacing on WordPress.com