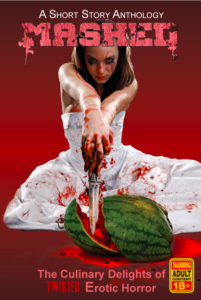 The best horror, I always find, is concerned with things we aren’t normally afraid of – things that we view positively. Unpleasant things are already unpleasant, and therefore difficult to mine for fear. It’s much more effective, albeit harder, to take things we want and make them terrifying – to take the familiar and expose a darker side.

Food and sex are relatively universal human desires. Things we want and enjoy. Mashed is  an anthology of stories linking those two positives to horror – turning what people most want into nightmares. Instant mashed potato, kitchen renovations, animal rescue – these are some of the starting points for a group of stories that are by turns violent, disturbing, satisfying and sometimes even funny.

The first thing to say is that Mashed is a horror anthology with sexual elements, not an erotica anthology with horror elements. All the stories contain sex – in one form or another – but none of them are designed to titillate.

There are seventeen stories in the collection, all dealing with some combination of food, sex, and fear. There’s a lot of variety present in all of those – a range of relationships involving different dynamics, sexualities, and occasionally species. The particular horror elements range from the outright and obviously negative (red-horned demons) to the more unusual (nudist cooking clubs). Not all the monsters have bad intentions, and not all the characters are doomed.

The quality of stories in the collection is also rather variable. Some of the stories are aiming solely for shock value, through sex or violence, and are the weaker for it. Horror is more than just making your reader shocked or slightly disgusted. I do understand that other people disagree with me here though – if you do want your horror to be explicit and shocking, you’ll probably like the first half of this collection rather a lot.

Personally, I preferred the second half. There are several stories that deal with the collection’s main ideas in original or well-crafted ways. A particular favourite of mine was Steven Carr’s “Sauce” which was original and deeply creepy. I also rather enjoyed Cobalt Jade’s “Arabica”, which was similarly unusual and well-written. Both stories eschew the standard horror conventions of a stalking danger for explorations of how human desire leads to our undoing.

The best stories, to my mind, were those that approached the concept through food rather than sex. All the stories contain sex, but in some it’s the main focus, in others its simply part of a larger idea. The food-focused stories tended to be more effective and more compelling overall, with fewer moments of gratuitous gore.