Adrian Tchaikovsky is an underrated author. He’s not unsuccessful – his books appear in mainstream stores, and he gets favourable reviews. Right now, he’s in the running for a Clarke Award. But he doesn’t get the same recognition as some fantasy/sci-fi authors; he’s not often mentioned in the same breath as Rothfuss or Martin or Sanderson. And that’s a shame, because I think he’s at least as good as them.

He’s written various standalone books, but Tchaikovsky’s big series is Shadows of the Apt. It’s about a world in which humans have bonded with insects, gaining abilities linked to the characteristics of whatever scuttling creature they are connected to. The armies of the ant-kinden march in lockstep, linked mentally into vast colonies. The spiders scheme and plot, the mantis-kinden fight, the moths retreat away from a world that has passed them by. And the merciless might of the wasp empire falls upon the cities of the lowlands.

Shadows of the Apt is one of the most interesting fantasy series I have read in ages. It’s different to most series on the market at the moment, and its better than most of them as well. I keep on recommending it to people. To simplify my recommendations, because I find myself saying the same thing to different people a lot, here are three reasons that you should read Shadows of the Apt.

You can walk into a bookshop and find a hundred stories about a weary assassin who has a secret softer side, or a farmboy who is to be the next wizard/hero/god-king. The shelves groan with knights and dragons and men in pointy hats.

There is, to my knowledge, only one series about the dark machinations of mosquito blood wizards and the debates of the beetle senate. Shadows of the Apt offers something no one else is doing. There’s a radically different setting, with radically different magic from the norm. Everything is new and unfamiliar and exciting. Whatever you think of the series, you won’t have read a thousand things like it before. 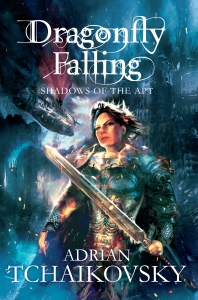 When I say “epic”, I don’t mean it in the “hyped up on Red Bull, playing Minecraft” sense. It’s a tragedy that the word has lost a lot of its punch because people keep using it to mean “kind of fun, I guess”.

I mean “epic” in the traditional, forceful sense. Shadows of the Apt is a vast and extensive series, dealing with complicated ideas and important deeds. It’s a series which genuinely requires all the space it takes up.

A lot of fantasy books use setting simply as window dressing. The heroes travel halfway across the world because the author feels vaguely that that is what heroes do in fantasy novels. There’s no reason for the travel – the story would have been equally good if the dark lord’s tower had been visible from the window. Shadows of the Apt is not like that.

A whole world is involved. A whole world of characters with differing emotions, a whole world which isn’t centred totally around a single protagonist. There are different civilisations and societies, and they feel different. When world-shattering events occur, they have actual effects. The series has a real sense of scale to it. It’s a story set in a world which breathes enough to seem real, rather than one that just acts as a backdrop to the main events. 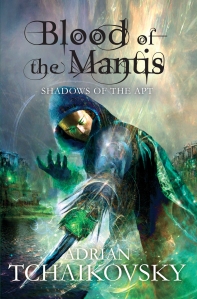 3. It has interesting conflicts

Narratives need conflict; a story in which everyone has everything they want is not a story at all. Fantasy tends to be rather lacking in that regard – a lot of books rely on the tired tradition of evil-for-the-sake-of-evil antagonists, or shallow wars between countries that seem to have no reasonable cause. I’m not saying that there’s no fantasy with interesting conflicts, but I’d argue that deep, complex conflict is far from the norm.

Shadows of the Apt has interesting conflict.It’s a series about the conflict between races and nations, between science and superstition, between democracy and fascism. Most of all, it’s a series about the conflict between tradition and progress. The series shows a world in upheaval. An Industrial Revolution-equivalent is turning everything on its head. Traditional sources of power and control are being eroded; traditional methods of warfare are no longer effective.

Everything is changing, everything is in a state of flux. None of the old rules and institutions can be relied upon. Society is undergoing radical change – change that half of the population don’t want, change that some of them are utterly incapable of adjusting to. Compared to most other fantasy, this is a big step up; it’s not just a more unusual source of conflict, but it’s explored in depth, from different perspectives.

There’s no questing “just because”. There’s no “orcs burnt your farm, here’s a magic sword”. There’s not even a “because a wizard says so”. What there is is a deep and complicated world, in which conflicts play out logically and organically. Plot arises from reasonable decisions made by various characters responding to their world, not warping it around them.

You don’t have to read the series, obviously. The choice is yours. But if you are looking for a new fantasy series, this is one that I would highly recommend. It’s complex, interesting, and fresh. It’s also (although this didn’t fit into a bullet-point of its own) about human-insect hybrids and therefore really, really cool. Mantis people duel spider people while moths talk to evil trees. It’s all pretty great.

The first book is Empire in Black and Gold. You can buy it here.