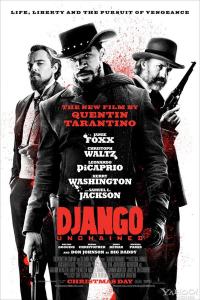 Tarantino is a director who, in my opinion, tends to be very hit-and-miss. Reservoir Dogs is fantastic, as are parts of Pulp Fiction. Kill Bill, on the other hand, leaves me cold – it’s meaningless, self-indulgent violence with no redeeming features. At his best, Tarantino is very, very good. At his worse, he seems almost like a parody of himself.

Django Unchained is one of the better ones. It’s not as slick or memorable as Reservoir Dogs, but it’s well-crafted and doesn’t drag. It also manages to explore an interesting society in some interesting ways.

Django Unchained is the story of a freed slave rampaging across the American South. Under the guidance of Dr. King Schultz, a german dentist/bounty hunter, Django learns the skills he needs to free his wife and extract revenge on the people who have wronged him.
Like all Tarantino films, Django Unchained is hyper-realistic; by that, I don’t mean that everything is an exact representation of reality, but that it tries to distil every element – the dialogue, the setting, the characters – to a purer forms. It’s very platonic, sort of. Every line of dialogue slots perfectly and pithily into place, every movement is deliberate and significant. No one ever stumbles over their words, or drops anything. Reality is concentrated and stylised.

That’s not for everyone. When it’s done poorly, as in Kill Bill, it comes across as adolescent posturing. For a Western though, I think it really works. Westerns are all about the significance of tiny glances, about the almost magical grace of the silent gunmen. The story is larger than life, so Tarantino expands life to match it.

Also like all Tarantino films, it’s hyper-violent. Blood fountains everywhere, eyes are gouged out, villains are kneecapped. It’s gory, but not sickening; because it’s so frequent and ostentatious, it doesn’t hit as hard as it would in a more restrained fashion. It should be mentioned that the sexual content is much less present – sexual violence is referred to, but not actually shown.

The acting is solid – Samuel L. Jackson features, as you’d expect, and the title role is taken by Jamie Foxx, who manages to display both cold rage and tenderness/vulnerability when appropriate. A particularly strong performance comes from Christoph Waltz as Django’s mentor figure, a civilised man in an uncivilised world. I was only previously aware of him from this SNL sketch, but adjusted quickly to him in a serious role.

The weakest element of Django Unchained is the plot. It’s a long film, but with only a few key moments, and various places where the narrative refocused on an entirely different objective. The issue is that there is no single plot arc, but a sequence of episodes loosely strung together – a villain is chased and caught, a new villain appears. In some ways, it would have worked better as a series of shorter films, each focusing on one arc in more detail. Various key scenes seem somewhat rushed, with new characters introduced only to be almost immediately blown away once they’ve impacted the plot.

In fact, the whole thing seems somewhat underdeveloped. The film took a lot of time, but clearly needed more. I wanted more depth and more detail, more focus on the transitions of characters throughout the story. Django Unchained left me wanting more of specific parts, rather than more of the story as a whole.

The setting – the American deep South, two years before the outbreak of the U.S. Civil War – is an interesting one, and one that would have been very easy to reduce to caricature. To some extent, that’s what has happened – the white people are gratuitously evil, the black people are either mistreated and servile or mistreated and defiant. But Django Unchained tries to show a more nuanced perspective – the slavers are shown as human even while they torture and mistreat their slaves, giving us glimpses of a complicated society. The cruel ranch owner loves his sister, the lynch mob bicker between themselves. The film suggests that, in a different society, in a different situation, the monsters wouldn’t be as monstrous – the bigotry and violence is a result of society, not something intrinsic to the characters themselves.

The nuanced portrayal of white people is, to my mind, rather better than the presentation of black people throughout the film. With the exception of the eponymous protagonist, many of the black characters are one-note only, occasionally even falling to the level of caricatures. The racist antagonist declares that “I believe there is a level above bright, above talented, above loyal that a nigger can aspire to. Say, one nigger that just pops up in ten thousand, the exceptional nigger.” Now, that line is said by a violent racist, a man who believes in phrenology and forces his slaves to fight to the death. From any perspective except that of a psychopathic bigot, it’s a hugely offensive statement that dismisses the humanity and intelligence of black people.

But the film presents a world in which that psychopathic bigot is correct. Django is presented as so much more capable, understanding, and independent than every other black character. Part of that is that he’s the hero, and so is going to be capable and the focus of the narrative. But there is not one single black character other than him who is presented as anything other than servile or stupid. He’s the only one with agency, the only one who shows strength of character and inner fire. Every other black character is passive and ineffectual. There’s a (hopefully unintentional) suggestion in the film that Django deserves his freedom not because of essential humanity, but because he’s better than every other slave.

A film set before the U.S. Civil War should absolutely present a racist society. It should absolutely present a society in which black people are maltreated and terrified – doing anything else would be dishonest. But there is a difference between presenting a racist society and presenting a racist society  in which that racism is justified. I felt it was a weak point of the film that, when so much effort was put into humanising the slavers, so little was put into humanising the slaves. For the most part, they are faceless servants, needing instructions to do everything. Django Unchained could have, without slowing or losing focus, added in the complexity that was lacking in its portrayal of black characters. It’s a shame that it didn’t.

Overall, I enjoyed this film. It isn’t a great work of art, but it’s a solid one, well-presented and engrossing. Django Unchained tries to be entertaining while tackling serious subject matter, and – save for the rather significant blind spot above – is successful at that.