I read the first of this series only recently, and thought it was okay. The next day, I blazed my way though the next three, getting more engaged with each one, so that first judgement may have been overly cautious.

Because I read them all in such quick succession, I’m not going to write about each one separately – the series blends into a whole when you read it all at once, and I’d undoubtedly end up repeating myself a lot or getting some events the wrong way round. Instead, let this serve as a review of the entire series.

The four books in question, The Long Way Down, Redemption Song, The Living End, and A Plain-dealing Villain, are all focused on one man: Daniel Faust. Faust is a sorcerer who uses a mixture of bullets, magic, and sleight of hand in order to stay alive in Las Vegas. He needs to use all three because, at various points, he’s being attacked by demons, other mages, mobsters, plants, mercenaries, puppets… The list goes on.

It’s not that he’s a bad guy. He’s fiercely loyal, moral where it counts, and doesn’t kill people who don’t deserve it. But Las Vegas contains a lot of people with designs on the apocalypse, and a lot of people who think that Faust is the person who can help them get what they want, or who’s most likely to get in the way.

There’s a thread of narrative running through the whole series so far, and the same cast of main characters, but each of these books stands alone, a self-contained problem that Faust has to fix.

Essentially, these are urban fantasy heist stories – in comparison to Jim Butcher’s

detective stories, or Ben Aaronovitch’s police procedurals, these books aren’t about investigating crimes but committing them. It’s a difference in approach that I find rather refreshing. There’s no confusion over who the antagonists are, just how they are going to be defeated.

Just like the first book, one of the strengths of Schaefer’s prose is action – there is violence, and it has some weight to it. Combat is detailed and believable, without magical handwaving.

Magic does feature, and there’s more of it than in the previous book, more clearly explained, but magic in Faust’s universe is not powerful and earth-shattering. It’s a weapon, and not an inexhaustive one. It fits right alongside the immediate, messy and personal combat, because that’s what a lot of Faust’s magic is; he can’t pull a satellite out of the sky, but you shouldn’t corner him in an alley.

One of the points I quibbled at in the first book was the romance – it wasn’t complicated enough, skated over the issues too fast. That’s changed in later books – the perils of having a succubus as a significant other are delved into.

The universe in the books is quite a dark one, with a lot of rather creepy aspects and implications. A particular favourite scene/concept of mine was the Garden of Eden; life, Jim, but not as we know it. Schaefer puts interesting twists on a whole lot of things, playing with the mythology and carrying it to logical conclusions.

There’s a lot of detail to the world, but a lot of it understated – so much of the darkness and the horror is at one remove and implicit. We don’t need to see the shadows finally thicken fully to be scared of them, or actually have the lights go out when in the audience chamber. The suggestion is enough; more would be overkill, and Schaefer understands that.

Power creep, in which the stakes get steadily higher with each book, seems to have been somewhat averted here. Faust doesn’t massively jump in abilities at any point, and spends most of the books penniless and bruised. He’s effective, but not enough to give himself a comfortable life. 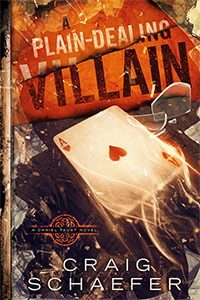 In reviewing the first one, I reserved judgement on the series. That was because, in my experience, books two and onwards of urban fantasy series tend to be more indicative of the series than the first. Just like TV pilots, the first instalment is the weakest.

Having read the next three, I like this series. I like it rather a lot. It’s a lot more original within the genre than I thought it was at first, and I like the direction the series is going in.

Buy them all here.