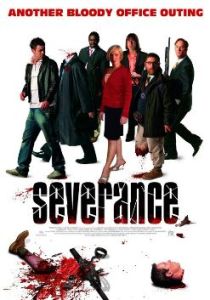 Severance isn’t just a slasher film though – it’s at least as much a comedy, and to be perfectly fair, it’s a much better comedy than it is a horror film.

The trailer is below.

Severance focuses on a group of office workers on a corporate retreat. They’re from England, and are travelling through Eastern Europe without speaking any of the relevant languages.

The lodge they’re looking for is hard to find at first, and when they do get there, it’s a dump. The pool is filled with leaves, there’s a pie of questionable provenance, the whole place looks very run down. No one is in the mood for team-building – half of them would like to just leave immediately.

The mood sours further when they realise that they are being stalked by a homicidal maniac.

To deal first with the horror aspects of it, Severance is not brilliant. The horror plot is relatively standard, and the action isn’t particularly compelling. There’s lots of violence, lots of separate events, but there’s little weight or impact to any of them. It’s not very scary, there’s only a small sense of menace, and the killer displays frequent and ridiculous incompetence. A group of fussy, fractious corporate drones should, one feels, be easy prey for any half-decent murderer, yet they

In many ways, Severance  feels like a low-budget nineties slasher film, going through the motions of fear – nothing makes the killer particularly stand out, and fear isn’t the main emotion that you feel watching the film. Again, from a strictly horror perspective, the film is forgettable.

If that was all Severance had to offer – a cookie-cutter killer behaving as expected – than the main impression of the film would be one of blandness. Luckily, Severance is more than a simple horror film.

Horror films, as a rule, don’t have massively deep or complex characters – it’s not really that important for the narrative. The focus is on the evil, on the monster; that’s why King can get away with middle-aged writer protagonists, and why most people can’t name characters from horror films. The characters aren’t important, they are just iterations on archetypes – the final girl, the moribund black man, the lazy sheriff.

Characters are where Severance shines. They still fall into to some extent archetypes, but they are office archetypes – the overly-enthusiastic nerd, the boss who tries too hard, the up-and-coming smug careerist. Severance takes those familiar characters and drops them in a creepy forest. Hearing the expected dialogue play out in the wrong setting is actually really funny; imagine The Office (US version), but occasionally one of the characters gets dismembered.

While they are getting picked off one-by-one, the team still tries to keep up the expected dynamic. Abandoned without hope of rescue, they engage in teambuilding paintball and still defer to their boss long after that system should have broken down. They aren’t heroes, they aren’t even really victims. Instead, they are petty and squabbling to the end, obsessed with things that are totally meaningless in their situation.

The most similar film to this is probably Shaun of the Dead, also a horror film in which the characters aren’t particularly focused on the monster; they want to survive, but they have other issues which frequently seem more relevant.

It’s very funny, and very well acted. Two actors of particular note are Tim McInnerny (probably most famous from Blackadder), playing the ineffective boss and Andy Nyman as his enthusiastic underling. It’s unusual, I find, to laugh at dialogue in horror films, and unusual to care about characters other than the final girl/couple. The characters in Severance manage not only to be entertaining, but also to be sympathetic; you wish they could get away, rather than just be cannon fodder.

There are moments of genuine pathos, moments where you feel a lump in your throat, moments where you would like to save people but have to watch them die. That’s an achievement – only one of the characters is presented throughout as likable, and the others are shown to be variously flawed. In a normal slasher film, I’d be rooting for them to die, but that’s not the case here. At the last, several of the characters transcend their archetypes and reveal a certain amount of nobility.

All of this combines to create a film that is at its strongest when about character, and at its weakest when it is about horror. The first half of the film is much better than the second half, when the killer starts to move in more seriously. As it reaches the end of its running time, Severance becomes more about action, more about rocket launchers and knife fights – that’s the weakest part. But the characters are still there, still pulling off moments of brilliance amongst the violence.

So again, my most common adjective is “surprising”. It seems like a low-budget, generic horror film, and to an extent it is. But there’s more to it than that – Severance is funny, with compelling dialogue and interesting characters. I wouldn’t recommend it as a horror film – if you want a slasher, go watch Scream. But I would recommend it as just a film – something that doesn’t fit neatly into a category (except “comedy horror”, but that’s a very small niche), and that will be entertaining.