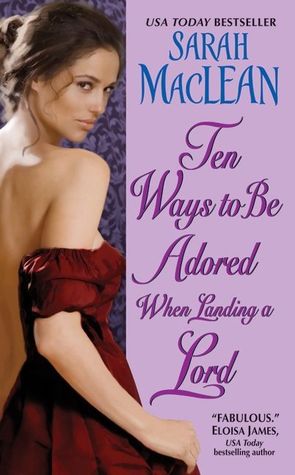 Ten Ways to be Adored when Landing a Lord is the sequel to Nine Rules to Break when Romancing a Rake, and the second in the “Love by Numbers” series. I wrote about the first one here.

It isn’t necessary to read the first book to understand this one; it is a complete story on its own. However, there are links and details between the books, recurring characters and so on that will be missed or seem irrelevant if you pick up the second book first.

The first book concerns the romance between a respectable young woman and the Marquess of Ralston, who is not respectable at all. Those characters, and their supporting cast, do appear in Ten Ways to be Adored, but in a much more minor role. The only recurring character who gets a big part is Lord Nicholas St. John, because he’s now the protagonist.

Lord Nicholas has sworn off love and women. His mother left him as a child, the woman he loved betrayed him. After a lonely childhood and a stint in a Turkish prison, Lord Nicholas finds it safer not to put his faith in the fairer sex; in the end, they let you down. Instead of romance, he spends his time collecting and cataloging antiquities, content to be left alone.

That all changes when Pearls and Pelisses, a high-society magazine, lists him as “London’s Lord to Land” – the most eligible of eligible bachelors. Suddenly, he is pursued everywhere by hordes of giggling women, unable to escape romance. Harried by debutantes and their mothers, he accepts a commission to track down the Duke of Leighton’s missing sister; if he can make it out of London, he might get some peace. Accompanied only by his long-time companion Durukhan, he heads North to Yorkshire.

Meanwhile, Lady Isabel Townsend, the unmarried daughter of a a profligate earl, is struggling to pay the bills for the estate. She runs Minerva House, a refuge for runaway women – outcasts from society with nowhere else to go. It’s an unconventional and somewhat illegal situation, one that relies on seclusion to avoid discovery. They should be safe though – how likely is it that a stranger would come to the remote reaches of Yorkshire and start asking questions?

That’s the basic set-up, which does take a while to explain, both in this post and in the novel. Because of the romance and the situation that MacLean wants, she has to spent an awful lot of time explaining how every character ended up where and as they are – Lord Nicholas needs not just to be single, but a world-renowned tracker, Lady Isabel needs to be poor and totally outside society’s norms.

It’s complicated and rather cluttered – there are three or four different books inside Ten Ways to be Adored, fighting to primacy. As a result, each separate plot line doesn’t really get as much space as it needs – the love story takes the focus, but I’d have liked more information on the other strands.

The most obvious example is Lord Nicholas’ backstory – it’s alluded to, and used to explain and justify the character’s actions, but there are parts that seem to beg for more space and time in the limelight. His past has secret work for government departments, dusky and heartless temptresses, mysterious scars. I’m not saying that I’m not okay with a book being focused on romance rather than adventure – that’s not the issue. I do feel, however, that if it is going to be mentioned and described, it needs to be used properly by the narrative rather than being left as a frustrating and tantalising hint.

Like the first book, Ten Ways to be Adored is based around a central framing device. Nine Rules to Break has Calpurnia’s list of unseemly activities she wants to complete, Ten Ways to be Adored has the magazine article – it doesn’t just list desirable men, but also gives tips on how to “land” them. In the first book, the list slowed the narrative down – it couldn’t wrap up until everything had been crossed off. Here, it’s more of a positive, with the article not shaping the narrative but providing a counterpoint to it. Isabel is constantly the advice quoted at her, only to proceed to do the exact opposite – it highlights the unconventional nature of the courtship, which is one of the key themes.

It is a book all about going against society – Lords who don’t want to marry, ladies who fix roofs, and (most shocking of all) a female butler. Everyone in the book is defying the ton in some way. I can see why MacLean has done that, and it definitely means that this is not a standard historical romance, but the book does struggle with anachronism.

How Not to Write A Novel is a book that goes through various errors and pitfalls that writers face; the authors term one of these the “vegan viking”. Essentially, the trope is one of a historical character with modern morals/sensibilities: a crusader who supports ecumenicism, a Medieval monk who adheres absolutely to a modern conception of science, a viking who won’t hurt anything. In this particular case, it’s a whole host of regency-era characters with highly and openly feminist ideals.

I do understand that society is and has always been more complicated than the overall, broad-brush overview, that despite the regency being remembered for rigid adherence to societal mores, people did break or ignore those rules. There were undoubtedly runaway women and those who defied convention. What I struggle with is the unflinching adoption of anachronistic morals by so many people, without much conflict or disapproval.

Everyone just seems to accept Lady Isabel’s premise that women are just as capable as men, that societal rules about gender roles and marriage can be cast aside without loss. Given that society still struggles with that idea today, it stretches my credulity that one corner of Yorkshire sorted it all out around two centuries before.

I am all for strong female characters, narratives that defy sexist conceptions and assumptions – more of that should happen. However, in historical fiction above all, it needs to be done within the context of the setting. If a book is going to challenge convention, it needs to actually challenge it, not simply handwave the situation aside and shoehorn modern morals somewhere. Such things cause conflict, and that can’t be ignored without harming the suspension of disbelief.

Similarly, and this was an issue I mentioned with the first one too, MacLean’s heroines have very relaxed attitudes towards sex, while still being mortified by unmarried men engaging them in polite conversation. Sex scenes are almost a requirement of the modern romantic genre, but it doesn’t quite fit – just as in Nine Rules to Break, the heroine gets “ruined” long before she stops worrying about that.

It’s not a major issue, rather less jarring than the general acceptance of Minerva House. As a convention of the genre, its perfectly possible to ignore the rough edges of the concept. Writing about it, it becomes more obvious, but it isn’t really a problem.

I’ve listed problems and not much else here, which gives a rather negative conception of the book. That’s not because I hated it – I enjoyed Ten Ways to be Adored. It’s just that all of the positives are ones that I mentioned before in the review for Nine Rules to Break, and I struggle with writing reviews of second books in series – I don’t want to repeat myself too much, and it is always easier to nitpick than to describe exactly what makes a book good. In brief then – Ten Ways to be Adored is not a book without problems, but it is a rather sweet one. The characters are interesting and atypical, the romance is well-constructed, and you get the payoff that all romances should have: it ends happily, the right characters end up together, emotional wounds are healed and true love is openly and loudly expressed.

I liked it – it does everything a romance should do. The structural/thematic issues don’t impact on the central ideas. Overall, I preferred the first one, but this is a satisfying sequel; it wraps up some loose ends, tells a self-contained story, and provides the fix that you want from a romance.