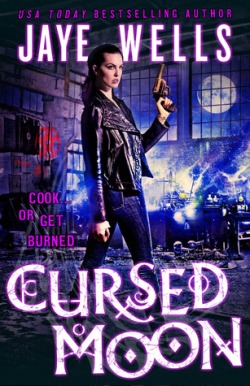 Cursed Moon is the second book in Jay Wells’ The Prospero’s War series. I wrote about the first one here.

The setup for the series is simple – magic exists, it’s very addictive, all the problems and crimes that currently accrue to drugs in the real world are also connected to magic.

The magic in question is alchemy – people buy potions to make them more attractive, to bring them luck, to give them strength. Those who can’t afford the “clean” magic potions – regulated and sold legally – turn to cheaper, illegal, dirty magic potions.

The covens control the dirty magic business, selling to anyone with money and acting as a law unto themselves. The police try to prevent and limit the trade, but are mostly unsuccessful; the covens are highly competent, and it’s very difficult to destroy a trade with a constant and clamouring command.

This book continues the story of Detective Kate Prospero, a policewoman in the city of Babylon. In the first book (Dirty Magic), Kate was seconded to the MEA (like the DEA, but for magic) to help stop someone selling a new and dangerous potion – one that led to homicidal rage and cannibalism. This time, a rogue wizard is stealing from the established covens, and trying to sow as much discord as possible in the city. All of this takes place in the lead up to a blue moon – a rare astronomical event that makes magic and magicians wilder and stronger, causing all kinds of problems for the overloaded law enforcement.

It’s a different crime, a different plot, but very much a continuation of the first book, in style and content. Magic is still roughly equivalent to meth, the same cast of primary characters feature, and similar themes are explored. If you read and liked the first one, this one will scratch the same itch.

There is, however, progression in the series; the characters aren’t just stagnating, but growing and developing. It’s a risk, with crime fiction, that the mystery becomes the sole focus and character development gets put onto the back-burner, taking place rarely and generally in epilogues. That isn’t the case here.

Instead, Kate’s social and personal life takes up almost as much space as the actual crime-fighting: she’s struggling to raise her (quite annoying and surly) brother on her own, and battling with internal magic- and addiction-related demons. Friendships are tested, romances are hinted at; the series is clearly developing, not just iterating. This development is praiseworthy, and good for the series as a whole, but it can sometimes slow down the actual plot with minutiae.

The plot itself is generally solid – the main villain of this novel is a much more dangerous and interesting one, complete with hidden traps and sudden reversals of fortune. Overall, this is a more tense book than the previous one, with more of a focus on the action and the danger to the characters. This is good, as the first book did have a tendency to rush through the climactic scenes. The final resolution of the book is a little deus ex machina-y, but overall the whole thing hangs together.

I do, just to be balanced, have a couple of gripes. The first is the magic; in the first book, magic seems confined to potions and the ability to brew them, with a few other mystical abilities that help with said brewing. Nothing flashy, no lightning bolts, everything very focused on the alchemy. It’s a conception of magic that works well with the parallel to drugs, because it means that magic can be traded between people and used by anyone, as long as a competent adept makes it in the first place.

The limits and usage of magic are less clear in Cursed Moon; at points, I found myself confused by how a particular effect was caused by a potion, and some characters appeared to be able to do magic off the cuff. I don’t really care for the change – for magic to be interesting in books, it generally needs to be limited, and to follow certain rules, otherwise it just ends up being a sonic screwdriver that can solve any problem.

The other issue I have is with some of the characters. I don’t have a problem with Kate or her cop colleagues, but I have taken a strong dislike to her supporting cast. It’s a personal preference, and one that I’m sure many readers would disagree with, but it seems that several of her problems could be saved by some minor characters displaying a small amount of thought or empathy. They all seem a bit too determined to be difficult.

This unnecessary bloodymindedness on the part, for example, of her neighbour and dependent brother, made  some scenes drag – as above, this is a book that is significantly concerned with the protagonist’s social life. When the plot was delayed by a character being annoying, I found the book slow going. I understand, of course, that most characters will not and should not be ideal people, but the extent to which they caused their friend or relative issues while still being treated as lovable or misguided went beyond that. I’m fine with sassy old lady characters. However, such a character can become so sassy and awkward that she stretches the bounds of credulity a little.

Cursed Moon is, in the main, a decent continuation to the series. It keeps the gritty tone and atmosphere whilst managing to update both the plot and characters. That’s all fine. You do need, though, to be prepared to soldier through certain sections – the book is doing everything it should be doing, but quite slowly.

If you are a fan of gritty crime fiction or slightly darker urban fantasy, go for it. Just bear in mind that this book isn’t as light as some of the giants of either genre; it does take an investment from the reader, and there is lots of subplot mixed in with the main plot. It’s slower paced, overall, than most comparable novels. You need to give yourself time to get into it, and time to get through.