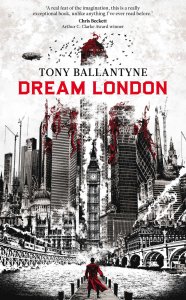 Dream London is urban fantasy by almost any measure – in brief, it’s set in the modern world, in a city, and there are magical elements. It even has many of the hallmarks – a poorly-shaven roguish protagonist, women primarily seen as sex objects, and things pressing against the walls of reality.

However, it doesn’t feel like that for much of the book. There are no dramatic fights against the forces of evil, no dramatic renounciation accompanied by lightning bolts – Dream London is a quieter, more thoughtful and less action-packed book than most of the genre.

One difference is immediately clear upon opening the book – it doesn’t seem modern. There are no phones, no computers. All the characters seem ripped from an edgy contemporary of Dickens. If you read the first few chapters without paying that much attention, you could be easily forgiven for thinking that Dream London took place in the 1830s.

That’s the central conceit – London is changing, warping and shifting in accordance with new rules that no one understands. Buildings move their location overnight, streets disappear or grow, people trying to leave find that the railways double back on themselves. Above all else, the towers stretch obscenely skywards, growing higher and higher with each day. It’s called “Dream London” now.

It isn’t just the layout of Dream London that changes though. Technology is strangely absent – characters remember cars, but don’t use them. Everyone walks, or rides the train. The characters themselves alter too, moving away from their original selves into the archetypes that Dream London requires.

Captain Jim (sometimes James – the name is important) Wedderburn lives in Dream London, and has done rather well from the changes to space and society. He’s happy not being introspective. Circumstances conspire, however, to set him investigating the cause and the source of the changes to Dream London.

The plot then unfolds in the mostly expected way – certain stock characters appear, he tours the major city sights as stakes rise, the reader slowly begins to unravel the conspiracy a few steps ahead of the protagonist. Particular mention should be made of the author’s skill in foreshadowing; motifs appear early on, and are pulled out at the perfect moment. The whole thing has quite a neat structure.

It’s a shame then, that there are moments where the structure falters – the overall direction is still there, but there are pauses, unnecessary diversions, scenes which struck me as rather gratuitous – both in content and existence. Not every scene needed to be there, and some of them did not add a huge amount. It’s a minor quibble, really, applicable to almost any book, but it’s more noticeable in this one.

It’s more noticeable because, as I mentioned above, the content of some of these unnecessary scenes seems likewise unnecessary. Urban fantasy as a genre has issues with the way it presents women – they tend to be there solely to be ogled at. You find a lot of women being described from the legs up, or getting pages of description while other characters get a few words. Dream London flips this somewhat – yes, women are viewed as objects, reduced to their sexuality, but that’s due to the magic, not to the writer.

That sounds like a cop out, but it really isn’t. At various points, characters notice and fight against the roles they are being forced into, and it is presented as a rather bad thing that women are slowly being pigeonholed into Penthouse- or Good Housekeeping-shaped boxes. Certain characters find themselves fighting against their own altered nature, desperately trying to cling onto their old personality. It’s a more nuanced take on it than you’d normally get in urban fantasy, and I applaud Ballantyne’s attempt to explore the idea, and to make something interesting and original from a tired old trope.

However, there were certain scenes – the executive dining room, for instance – which didn’t belong, and which went a way towards undoing that good impression. Too much lovingly-described sordid detail that did nothing for the plot, and nothing for the character development. Such scenes make the overall tone of the book a little more tawdry – most of the time, Ballantyne is writing a reasonably tragic story, about a city and a people being torn down and enslaved. Devoting chapters to nothing more than titillation of the same thing we’re meant to be deploring cheapens it, lessens the impact.

There were moments, essentially, which left a bad taste in the mouth, that didn’t need to be there. I’m not one for censorship, or for reading only the purest of virginal texts, but I do think that it needs to serve some overall purpose in fiction; some sections of Dream London didn’t. It’s not a massive problem – I could point to scores of books that are far worse for it – but it hit a wrong note for me.

To return to the positives, I really enjoyed how the author build up the setting – fairyland rules applied to a familiar city. London’s alteration is subtle and pervasive; even though the entire book is about the changes, Ballantyne doesn’t beat you over the head with it – he lets the reader notice on their own that something is amiss. It’s nicely done, slowly bleeding the details into the narrative rather than dropping them all at once, and it helps add  to the pervasive, creeping sense of wrongness.

I also liked the narration – it’s told in first person from the protagonist’s viewpoint, and uses that to full advantage. At its heart, Dream London is a story about identity – the characters reject the identities that are forced on them, and have to confront their own identities truthfully. The first person narration lets you see Captain Jim’s struggle with who he is and who he is being turned into. It’s well done – the changes don’t seem forced or rushed, and the reader is taken along on each step.

It also bears mentioning that Dream London differs from urban fantasy in another key way – it is the only fantasy book that I can currently name that seems to be heavily inspired by the banking crisis. It’s good to see something more than war as an inspiration for fantasy books, though I’m not sure that it’s fertile ground for many more works. Regardless, the change is interesting, and the shift in focus from combat to property laws allows the book to explore ideas that aren’t normally the focus of fantasy.

Dream London is an interesting book. It does a lot of things well and it approaches urban fantasy in original ways. I think, in the end, that I’d highly recommend it, but only to certain people, and only for certain reasons. It isn’t like other urban fantasy – it won’t scratch the same itch as Stormfront or Magic Bites. It isn’t a satisfying combat between good and evil. If you want something to fill a Dresden-shaped hole in your life, this is not the book for you – go read one of the countless imitators.

If, on the other hand, you want something new and creative, albeit a little rough around the edges, read this. It’s well-constructed, and tackles ideas from a different perspective. It might not be cathartic, and it might not be a straightforward adventure, but I think it is worthwhile.