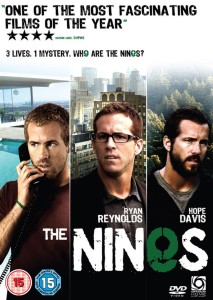 The Nines was leant to me by a friend, after we discovered our mutual affection for Ryan Reynolds. We had a long conversation about his films, and found many opinions in common; we even both enjoyed Green Lantern.

Over the course of the conversation, it eventually became clear that our individual interests in the actor were, whilst similar in effect, based on different causes. I like Ryan Reynolds, as I’ve mentioned before, because he’s a likeable, idealised everyman. She likes Ryan Reynolds because he looks good shirtless. We argued, briefly, over whose reason was shared by more people.

Despite this difference, she did lend me The Nines, assuring me that it was a good film even if I didn’t harbour a secret passion for the actor. She turned out to be right – I did enjoy it. With that said, I probably would have enjoyed it more if Ryan Reynolds was my idea of Adonis.

The Nines is three narratives twisted round each other and interlinking in various ways. Ryan Reynolds plays the protagonist in each of the three, taking on the roles of an actor, a writer, and a game designer at different points in the film. The three stories contain the same supporting cast as well as the main actor, with actors appearing in slightly different and complementary roles.

The stories aren’t totally distinct – there is an underlying plot, and underlying ideas, but the discovery of the specific links is pretty much the point of the film, so explaining that in a review would be rather unfair. In brief though, the three shorter narratives all raise questions – details don’t quite make sense, motifs appear throughout (hence the name – the number nine is a recurring idea), and characters themselves express confusion and disquiet. Nothing gets resolved until the final narrative starts putting all the pieces together.

It’s a strange film, one that takes more risks than a standard vehicle for a famous leading man. It isn’t clear a lot of the time, and it’s content to leave the audience confused for quite a while. I’m not saying it’s incredibly deep, or that it shines out amongst other films for its interesting ideas, but I am saying that it is surprisingly complex, and surprisingly prepared to make the audience work for the payoff. Most modern films seem to spell everything out in rather too much detail, as this comic suggests, albeit hyperbolically.

The Nines kept me guessing for most of the film – normally I’m pretty good at working out the twists, and I had parts of the film worked out in my head, but the overall idea wasn’t obvious until it was explained. Trying to work out the puzzle was the thing I most enjoyed about the film – it’s always entertaining to try and spot the resolution/murderer/traitor in a film, but it’s rarely this difficult.

As a result though, the payoff wasn’t really worth it. The film built up to a dramatic conclusion, a big reveal, but it was built up too much, and wasn’t a very interesting idea. It’s a shame that the film doesn’t live up to its promise, though I’m not sure that there is any resolution that would have satisfactorily wrapped up all the plot hooks and loose ends. At some point, a problem becomes too complex for an easy resolution. You either end up with a trite ending, or a vague one; The Nines’ ending, sadly, qualifies as both.

But the journey is the fun bit, the film that leads up to the unsatisfying conclusion. The Nines is well made, incredibly consciously crafted and making tight links between different ideas and plot arcs. Characters are believable and quickly established, and the whole thing is just so clearly deliberately designed and polished.

Its a very detailed film – little aspects of the narrative come back to haunt you, you can spend time looking for clues in the back of shots or in minor things the characters mention. It’s the sort of film that you can pull apart, discuss in detail, without worrying about over-reading. It’s trying to be interesting, trying to complex, and I value that.

The acting is solid – as always, I find Ryan Reynolds to be very watchable, and Melissa McCarthy shows an impressive emotional range. Again, she’s an actress I have a lot of time for , and it’s good to see her taking a central role with more than one obvious note. She gets to play roles with some depth and variety to them in The Nines.

I’m aware that this review doesn’t actually give much of an idea of the experience of watching the film – that’s not an oversight on my part, it is just hard to describe the overall feeling. There’s no single overarching emotion to the film – it demands a range of responses. At times, it’s very down to earth. At others, the changes in narrative and repeated characters give an oddly dreamlike quality to the whole thing. Frequently, as the main characters realise that something is wrong, the film becomes extremely creepy. You start looking for the significance in every single detail, trying to find one clue that will explain the whole thing and let you relax, but it eludes you.

I really liked The Nines. It was thoughtful, well made, even subtle – a word that doesn’t really apply to many films. Above all, it was original and somewhat risky – it doesn’t fit into an obvious genre (imdb suggests science fiction, amongst other less likely alternatives, but it’s only science fiction in the way that The Time Traveler’s Wife is), it doesn’t tell a simple story in a simple way. I appreciate films that don’t treat me as a moron, and The Nines has a bit of respect for the audience. More films should follow its example.

It isn’t the greatest film ever, and the ending lets it down. But it is a worthwhile film, and an interesting film, and a hard-to-classify film. I’d recommend it.