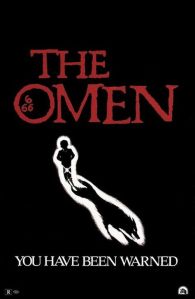 I’ve only just got round to watching The Omen; I tried to watch the remake when it came out, but the self-consciously dark style soured me on the whole concept. I put all Omen-related things from my mind, and forgot all about it.

Bored, browsing through Netflix for something to watch whilst working, I came upon The Omen and decided to give it a proper try. I’m glad I did – I got very little work done, but The Omen was atmospheric and engaging.

The basic plot is simple – a high-ranking US diplomat adopts a child after his son is stillborn. All seems fine, and then hints that something might be wrong start to appear. The child is terrified of churches, and animals fear the child in turn. A strange priest keeps giving cryptic warnings, and photographs seem to offer clues to future tragedies.

Essentially, The Omen is Rosemary’s Baby a few years later – the evil child is a toddler, not a baby, and the focus is on the father, not the mother, but all else is roughly equivalent. The antichrist arrives in the form of a small child and his parents struggle to cope with the precocious youngter’s evil ways.

As in the title, the film was made in 1976, which makes it seem rather dated now. The colours are muted, some of the outfits are ridiculous, and all of the special effects are those that can be managed with camera angles and stunt men. This necessarily limits the impact of some scenes – the devil-child’s devil-powers consist of staring while the music swells; a few scenes later, something terrible happens to the object of the glare. There’s a lack of force and realism to all of the violent and supernatural scenes, which neccesarily prevents the film from being truly horrifying.

So it isn’t a scary film – I’m easily scared by films, but The Omen didn’t leave me checking behind each door and window for drowned Japanese children or evil clowns. It isn’t a scary film. What it is is a very creepy film – what the film lacks in dramatic climaxes and fancy CGI, it makes up for in atmosphere. Throughout, I was wrapped up in the settings and ideas, waiting on the edge of my seat for the next piece of the puzzle to appear, for the building music to reach a crescendo.

There’s a wonderful feeling of inevitability to the whole thing – the forces of evil aren’t wild and chaotic, railing against the heavenly hosts. Instead, they are calm and polite. The antichrist’s nanny is a particular example of this; when the child’s father gives instructions that would be detrimental to the whole bring-about-the-apocalypse agenda, she doesn’t object. She doesn’t lash out at him, and she doesn’t suddenly reveal the full extent of her evil plan. Instead, she nods, smiles, and agrees with the whole idea. Then she ignores it, or finds a way around.

At no point does it feel as though the side of good is winning – any setback is clearly temporary, and also clearly not important to the minions of the Ruinous Powers. It doesn’t matter what steps the ambassador and journalist take: the antichrist’s development will not be affected in any meaningful way.

This, coupled with the titular omens that appear throughout the film, gives a truly leaden feel to the atmosphere; the protagonist is trapped in a situation he doesn’t understand, with no true help of winning. There is a clear sense that all the ambassador is doing is delaying the antichrist’s arrival. He can’t stop it.

It’s the atmosphere that such films need; Rosemary’s Baby had it, The Devil’s Advocate had it, and so on. All such films rely on the idea of power and plots beyond our comprehension, and therefore can’t be too upbeat. The atmosphere needs to be hopeless to mirror the characters’ outlook: frightened, confused, and outmatched. It’s masterfully constructed, really making the viewer feel the crushing weight of despair and helplessness necessary for the film to have its impact.

There were a few moments that stood out as incongruities – British policeman, for example, both carry and use guns. Perhaps this stands out less to a US audience who are unfamiliar with UK society, but as a British person myself, that put paid to the immersion for a little while. Only a small number of British policemen carry guns, and they are used very sparingly. It’s a minor quibble, but it struck a wrong note and made

Similarly, the film is well cast, with the different characters filling their roles admirably. The only hiccup was the child – Damian himself. I spent the first half of the film thinking of him as really quite sweet. This naturally caused problems when he started to come into his power and needed to be taken seriously. Luckily, his role is actually rather minor – the more explicit villainy is on the part of his governess. As such, the fact that the floppy-haired toddler seems far too shy to heralded in Revelations isn’t a major issue: the governess provides the malice and the actions, while Damian just stares oddly.

But the two above paragraphs are minor quibbles – overall, the film is extremely competent. It has a wonderful creepy atmosphere, and the understated nature of both the acting and the entire aesthetic – dull colours, masterfully-wielded music that collects and commands the viewers’ attention – supports and builds upon that.

It’s a very different kind of film to much of modern horror – much calmer, much more understated. However, that’s a positive (at least to me). I like films with more of a psychological, slow burn element to the horror, and The Omen delivers that in spades. You won’t finish watching it and jump at shadows, or want to sleep with the light on. It isn’t that kind of film. But what it does do, and does well, is the horror that’s deeper than just shock or squeamishness. So many films try to provoke disgust, with varying degrees of success. The Omen tries to make you feel a profound sense of disquiet and expectation, and does that with great success.

It’s one of the most famous horror films ever made. It’s also extremely watchable. Buy it here.