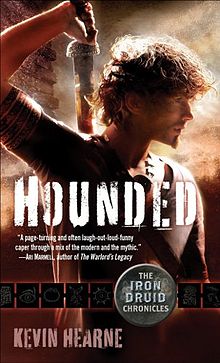 Over the past two weeks, I haven’t had much opportunity to read, and what I have been reading has all been the same thing – successive books of Kevin Hearne’s The Iron Druid Chronicles. I’m on book five now, working solidly through them whenever I have a spare moment. It would be deeply repetitive to write about each book separately; each review would mostly just be a repeat of the one before. Instead, I think it makes much more sense to write about the series so far as a whole.

I’m not going to write about books four and five in this post though – the first three form something of a sequence, most obviously denoted by the initial “H” in the titles. As I haven’t finished the second three yet (titled with an initial “T” – except number six, which I find inordinately aggravating), it seems unfair to make any judgments about them.

Books one to three are distinct titles, capable of being read on their own – they have separate arcs and villains, and the immediate plotlines are resolved. However, there is a common thread running through them: book one sets up the motivations and sides of the eventual conflict, book two provides a reason for the reluctant protagonist to get involved, and book three actually resolves the conflict.

It’s interestingly constructed – you can see the tendrils of plot forming well before they actually get pulled into the focus, and it gives the series a sense of momentum and pace between books. It’s common for fantasy series to set up antagonists and and events well in advance, but it is rarely done in a way that engages interest on its own: it is simply set-up for later books, not something that adds depth and detail to the book it’s in.

The series, to briefly encapsulate it, is about an immortal druid (Atticus O’Sullivan) 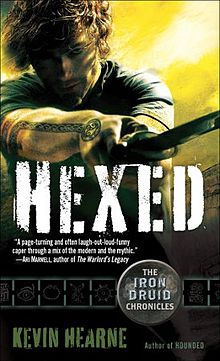 living in the modern world; he runs a bookshop, and tries to avoid the attention of powerful magical and malevolent forces. As a general rule, he is unsuccessful at this. Each book, as already mentioned,  has its own plot – the druid faces down, in order, Irish fairies, Nazi witches and Norse Gods.

He gets pulled into conflicts through friends and obligations, always a reluctant participant in earth-shattering events. A diverse supporting cast of characters – including an Irish widow, an Irish apprentice, and an Irish wolfhound[1] – give him a human side to counter-act the fate-of-the-world stuff.

I wrote about the first one a while ago, and the series has kept the promise of the first book – it’s still interesting, still exciting, and hasn’t jumped the shark any more than expected. Hearne isn’t trying to write great literature, and it is never going to be that, but it is fun. In my first post, I mentioned a couple of problems that I thought Hounded had, and most of them have dwindled; the issues ironing out as the series progresses.

It is the curse of urban fantasy (and fantasy as a whole) that every book must be bigger and better than the one before. If you kill a dragon in book one, you need to kill ten the next, and then the incarnation of Chaos in mega-dragon form in book three. Dresden went from a small-time detective tracking down a single spellcaster to attacking the heart of winter and making deals with the Fallen. Anita Blake used to struggle to stake one vampire – suddenly she’s using sex magic to control werewolf packs. Skullduggery Pleasant was just a normal walking skeleton, then all at once his split personality reappeared as the necromantic messiah. 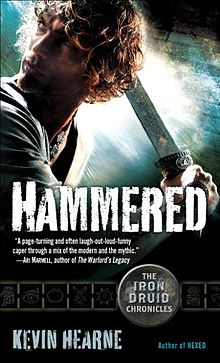 Atticus O’Sullivan starts out in opposition to the Celtic gods. I was worried about the power creep – where can you really go from fighting your own deities? What is the next step? It turns out that the answer isn’t up, but sideways: Atticus takes on other pantheons – all the other pantheons. Most gods that readily spring to mind, and then several more, make an appearance. It works, providing a steady escalation without going too crazy; once you’ve beaten one god, the only logical challenge is another one, but gods of a different flavour don’t have to be that much more threatening to still be interesting.

One pantheon’s appearance did surprise me: both the Virgin Mary and Jesus are actual characters in the books, which is rare. The christian god tends to be mentioned in dark fantasy, but as an abstract force, not as a walking and talking being. It is refreshing to see an author actually pushing over that implicit boundary – it seems like the sort of thing that might end up a risky decision. Mary is roughly how you’d picture her, but Hearne updates Jesus significantly: he’s a dreadlocked dark-skinned man who makes jokes about his own divinity. He comes across as rather likable.

I was also worried about the portrayal of women – in Hounded, it’s all very one note. Women are all beautiful and lust after the main character – not the most nuanced take on female characterisation. Luckily, in the next two books, this tendency disappears: you get female characters who aren’t immediately set on leaping into bed with Atticus, and women start getting described in more ways than from the legs up. Again, as the series progresses, Hearne’s coverage of women gets more interesting and varied, so that they aren’t just the standard urban fantasy window dressing.

Overall, The Iron Druid Chronicles improves with time and more books in the series. It started off interesting, and all the little problems start to break down with more space for Hearne to develop the world and characters. If it continues this trend, the rest of the series will be one of the strongest in urban fantasy. It is no worse than any of the others, and it is starting to get better than most.

The author’s website is here, and a link to all of the books on Amazon is here.

1. That isn’t actually fair – there is also a Norse vampire, the Native American Coyote, and a host of others from various pantheons and traditions. It’s actually one of the more culturally diverse series.

2 thoughts on “The Iron Druid Chronicles – Books One to Three.”